This is strange because I have absolutely no recall of writing this letter in 2003, or of the New York Times publishing it. But re-reading it now, fifteen years later, I’m glad I did write it. It was such a strange state of affairs if you know New Jersey politics and the nuances of how the Senator and the two Assembly members usually run as a team. But now always.

Nia Gill, the beloved State Senator (who was also my neighbor in Montclair), got a primary challenge from Leroy Jones. Somehow, the incumbent Assembly candidates joined his slate instead of sticking with Nia. In turn, she recruited two new Assembly candidates to fill out her slate. But then in the Democratic primary, she won but so did the Assembly candidates from the Jones slate. That created a situation where Nia Gill was heading a ticket (in 2003, state senator is the top of the ballot, another idiosyncrasy of New Jersey politics) that included two people who ran against her.

That’s one of the reasons I did a lot better than a Republican in the 34th District is supposed to—Nia Gill fans were furious at the two Assembly candidates who had betrayed her. One of those candidates, Sheila Oliver, is now our state’s Lieutenant Governor. And Leroy Jones has done just fine, as well. He’s the Democratic Party chairman for both the town of East Orange and for all of Essex County, which makes him a major power player in the state.

Here’s a photo of me and my running mate Frank Fusco watching while Leroy Jones speaks at a candidate forum. 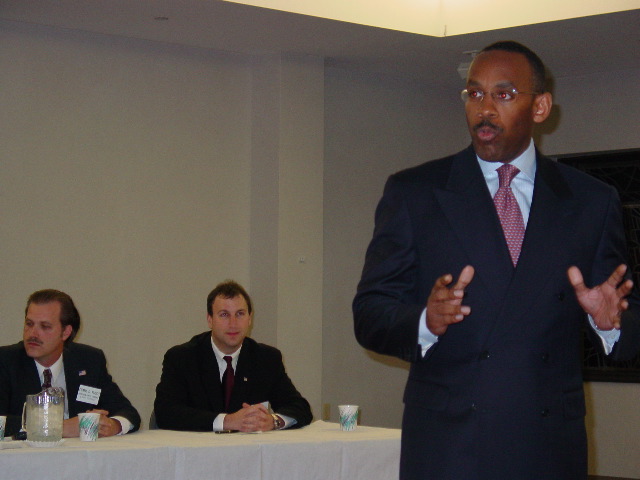