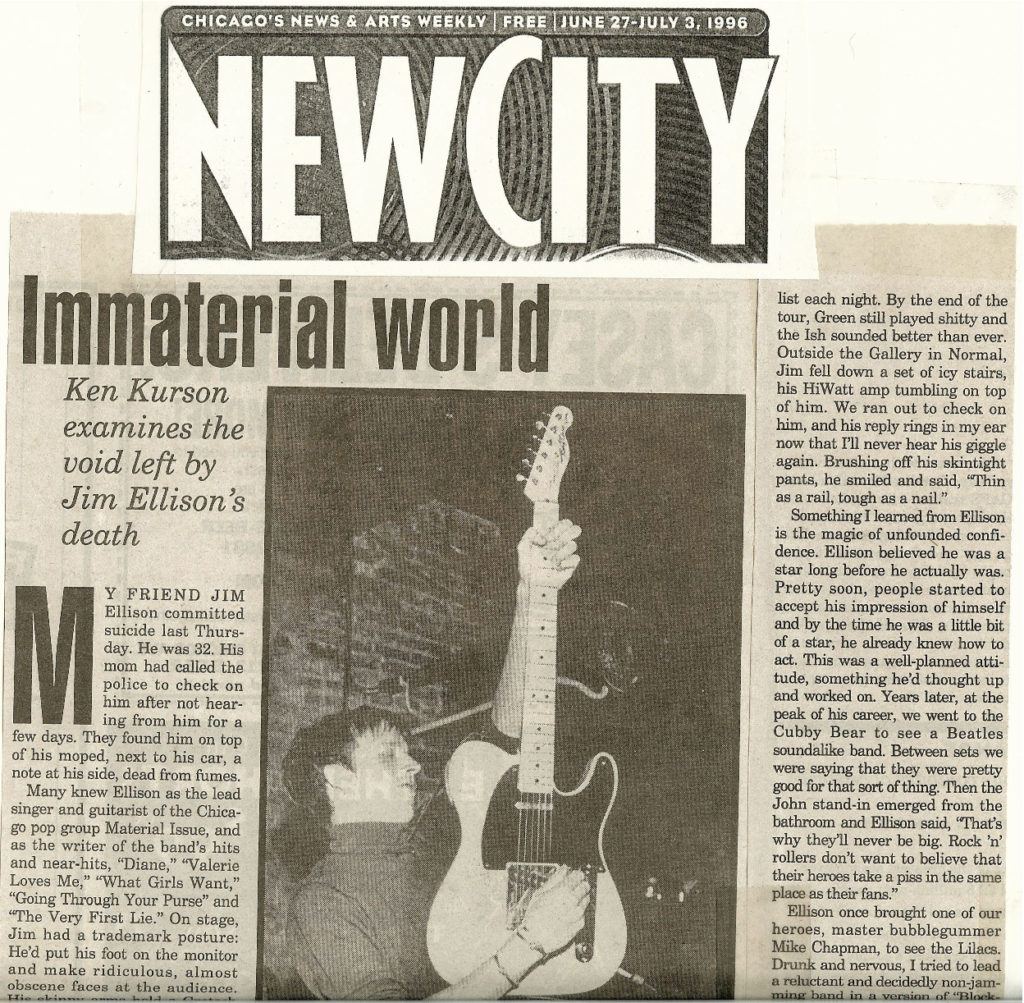 After Jim died, I wrote a long obituary for NewCity, which was sort of an alt-alt-weekly in Chicago. I had moved to New York three years earlier, but I had seen Jim more recently because MI came to the city to open for the Pretenders and Jim invited me to the concert and we hung out backstage and watched Chrissie Hynde do her thing after the Ish set.

When my obit ran a week after his death, Jim’s mother Patricia Ellison called me at my desk at Worth magazine. Thinking back on it now, I can’t even imagine how she knew my number or where I worked. I knew Mrs. Ellison a little from hanging out at Jim’s house and working on cars, but not well enough that I’d have guessed she knew how to get hold of me. But she did, and she told me how grateful she was for the remembrance.

I have always believed in the value of obituaries and properly honoring someone. My first job in writing was for a reference book called Annual Obituary, where I wrote lengthy recaps of the lives of people like Stella Adler, Mario Bauza, Hank Iba and Don Drysdale. When I became editor of the Observer I would publish (and sometimes write) super-long obits when someone important—or even just meaningful to me—had died. I wrote obituaries for everyone from David Carr to the journalist Jim Frederick to people like my mother or Sam Halpern, who weren’t well known but deserved to be remembered. I would also sometimes write critical obits of people who deserved to be remembered but maybe not glorified, like Gunter Grass. And some of my favorite stores I ever published (but did not write) were obits of people like Peter Kaplan and Lou Reed.

I’ll never forget that call from Mrs. Ellison, a mom grieving her unique son. I bet she remembers it, too.

I got a ton of email after that ran, and being that it was summer 1996, hearing from strangers via email was still quite novel, that sense of how the Internet was shrinking the world. RIP, Jim Ellison. I wish you knew how many lives you touched.

Above are photos of how the story looked in NewCity, a classic Philin Phlash image of Jim holding his Tele Deluxe vertical at Cubby Bear; below is one of the only photos I have of me and Jim together, from when he produced The Lilacs first record.