Alleen Barber had been my friend for a while, though now that I think about it, I cannot remember exactly how we first met. We seem to have a bunch of friends in common and she worked at United Feature Syndicate after I did, but I can’t say how we grew to know each other. But we did and she ended up directing the editorial page at Newsday. During the 2004 Bush-Kerry election, she was looking to add a conservative voice. I was working full-time for Giuliani Partners at the time and needed to be very careful about what I said in public, but I respected Alleen’s judgement and knew she wouldn’t paint me into the “right-wing nut” corner.

Alleen and another editor took me out to dinner somewhere near Penn Station to finalize terms and I winded up writing a bunch of columns for them during that season. It’s hard to picture now in an era of newspaper pulverization but Newsday was a real force back then. It was the 10th largest paper in the country and had a real presence in New York City—it was even a Pulitzer finalist that year and had launched the careers of some exceptional journalists, including one of the country’s greatest science writers Laurie Garrett.

For some reason, most of the columns from that era do not seem to be online. Here’s one that is, which is really the most boring one I wrote—just a simple endorsement of President Bush for re-election.

Much juicier was the one pictured below from July 2004, in which I argue that George W Bush vs Howard Dean was the matchup that America deserved. I was right. I have a goofy expression on my face for the photo they used because Steve was on my lap. 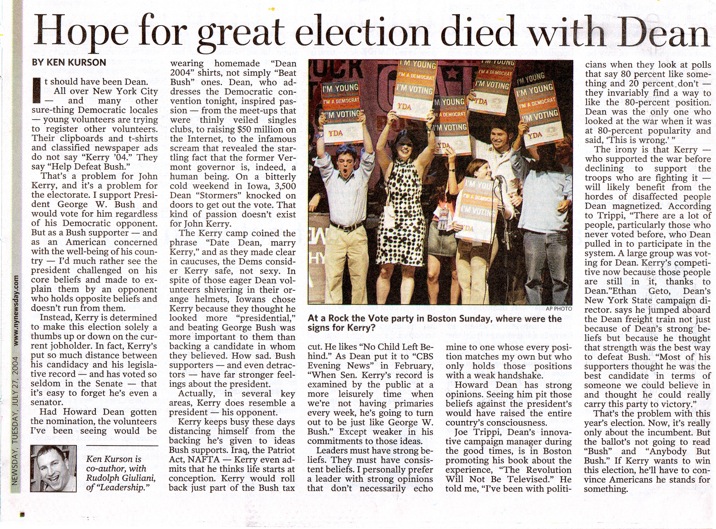