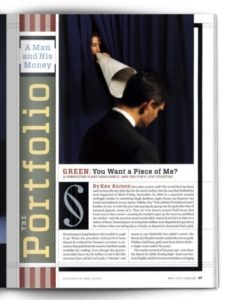 I wrote a column about money for Esquire from early 1997, when David Granger hired me as part of the wave of people he hired when he was first named editor, all the way til Hearst fired him in early 2016. For my first five years, it was every single month. I was a legit staffer and had an office and desk at the old building on 55th Street where Hearst kept some of its titles.

We were directly across the street from Soup Kitchen International, the small soup storefront run by Ali “Al” Yeganeh that was later made famous in the “Soup Nazi” episode of Seinfeld. This was before it was franchised. He wasn’t as mean as hilariously portrayed in the show, but it’s true that he ran a very tight ship. To me, it always felt less about being a tyrant and more about pride in his food and wanting it to be served hot and fresh and efficiently to the tons of waiting customers standing in line. He didn’t want you to stand in line for 30 minutes and then get to the front and only then start thinking about your order. Makes sense!

Anyway, I would estimate I wrote 150-200 columns for Esquire over 18 years of writing. Some of them I remember almost perfectly. But others, like this one about the public offering of KPMG International, I do not recall in the slightest. Reading it now is such an odd feeling. The voice and style sound like me. But I have zero recollection of any of the facts or even thinking about this company.

I even get off a fairly good line, suggesting “Look for Accenture and PricewaterhouseCoopers to go next (perhaps the former Andersen Consulting and the twenty-two-letter company could heal thyselves by consulting their way into better names).”