I don’t remember with perfect recall all the details here, but the salient point is that I was listening to public radio in March 2003 when a guest named Bruce Lincoln came on. A professor at the University of Chicago, Lincoln was promoting his book Holy Terrors, Thinking About Religion After September 11. After making the usual professorial points about how awful America is in general—imperialism, racism, capitalism—Lincoln crossed into truly tin hat space by saying that George W. Bush was essentially no better than Osama bin Laden because both  “wanted to associate themselves with everything that they valorized as worth defending and they depicted their adversaries as brutes.”

Prof. Lincoln noted that Bin Laden called the West “infidels, sacrilegious crusaders, abusers of the faith” while Bush “characterized Bin Laden and al Qaeda as terrorists, criminals, perverters of a great religion and as extremists and dangerous” and he called the difference between those assessments mere “details.”

Even the host was shocked—and this was NPR. The host asked Lincoln if he was actually justifying the worst attack ever on the United States, Professor Lincoln quickly denied it. And then did exactly that.

“There are points that lead a group to take such desperate measures. There are complaints about the stationing of American troops in the Middle East, propping up of oppressive regimes in the Middle East, interference in Islamic politics, and also the cultural invasion of the West. …  All of those I think are worthy of consideration notwithstanding the fact that it is brutes and murderers who make such points.”

After my editorial taking him to task ran in the Chicago Sun-Times, Prof. Lincoln wrote a nasty gram about me somewhere—I cannot find it and Google won’t cooperate. But I remember thinking that the exchange itself, between two U of C people (him a renowned professor and me a dropout) articulated better than I ever could how lucky we are to live in a society in which ideas can be debated without fear of attack. 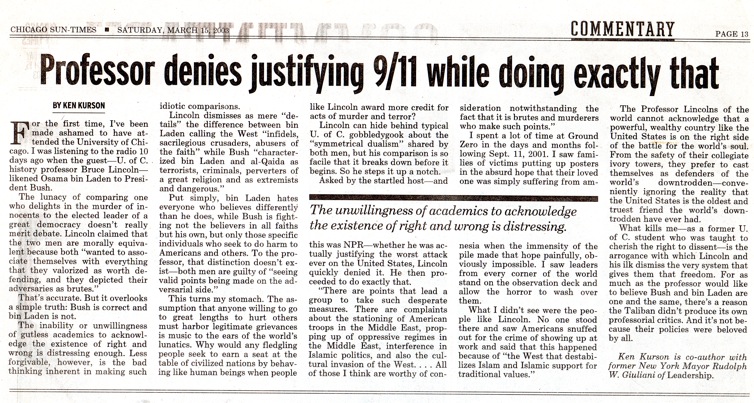