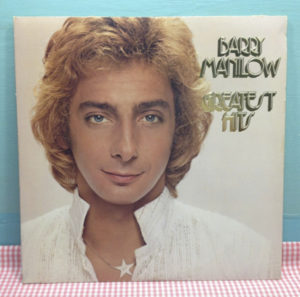 It’s remarkable how the music that resonates with you through the years depends at least as much on who you were when you first heard it as it does on some objective analysis of its quality.

The first record I ever owned was Barry Manilow Greatest Hits, which I got when I was 10 in 1978.

His big hit at the time was “Ready to Take a Chance Again,” which was used to great effect in the Goldie Hawn-Chevy Chase romp “Foul Play” (which I also loved, by the way). So everything from “Daybreak” to “Can’t Smile Without You” to his “rocking” numbers like Copacabana — I loved all of it. I loved the singing. I loved the instrumentation. I loved the over-the-top sentimentality. All of those qualities eventually landed in my own songs. Not that I would ever put myself in the same category, either talent-wise or obviously success-wise, as Barry Manilow. But man I loved that record and I wore it out, and I remember even being assigned to be the lead male dancer at my camp and the tune that our choreographer had chosen was the theme to American Bandstand. Discovering that this song also had been written by Barry Manilow just felt quite perfect to me.

Predictably, as I got to high school and wanted to seem cooler and probably also not get pummeled, I wasn’t as willing to acknowledge how much I loved that particular genre of sappy love ballad. But secretly I still did. And then something funny happened as I entered the punk and indie-rock phases of my musical career.

I joined Green, this band with tremendous critical appeal led by Jeff Lescher, a high integrity songwriter and possibly the greatest singer to come out of Chicago since Curtis Mayfield. Because we were championed by a record business pro called Regina Joskow, who at that time was working for Roadrunner Records, we got access to a lot of other bands that were either on her label or that she loved. And I remember Regina inviting us to see Soul Asylum at the Cabaret Metro in Chicago.

Now I had already seen Soul Asylum when they opened for Husker Du in January the night after the Replacements played in what might be the greatest ever “Minneapolis weekend” in Chicago. But this was a couple of years later when Soul Asylum started to have some commercial success with their Hang Time album and its single “Tied to the Tracks” getting on the radio. Jeff got the chance to go backstage and sort of watch the show from the side. I already loved Soul Asylum and now I felt like a rock star, with Green’s leader being almost at the level of being treated like a peer by this happening band that was burning up WXRT.

For their encore, Soul Asylum performed “Mandy,” a song I loved from the moment I heard it until this day. They did it kind of sloppy and with what we took to be a winking nod toward the audience, which was all singing along. After the show, the guys were great and said they had heard good things about Green, who had opened for the Replacements a couple of times by then and for Husker Du as well.

So the next day, Jeff and I did a postmortem to discuss what they were doing that was innovative or cool that maybe we could learn from and integrate. We got to the Mandy part and I observed that it was a funny and clever way to take a song that every single person in that room knew and turn it into a tongue in cheek singalong. I was surprised — not for the first time and not even for the hundredth — by Jeff Lescher’s contrarian, fascinating and ultimately correct take on the same moment from the show. Jeff told me that for as corny and filled with empty calories as Mandy might be, it was by far the catchiest and ultimately most memorable song that Soul Asylum played the entire night. And that’s just a fact. That’s not a knock on Soul Asylum, who I love to this day. It’s not really even a comparison of the ultimate worth to the music-listening world of either artist, but if you had some way to poll those concert goers…

You know, I later got involved in politics and one of the keys to being a successful political consultant is knowing that there is a huge difference between what people tell a pollster is important to them, and what is actually important to them when they are alone in the ballot booth. A good example of that is how voters constantly cite the environment as a top issue when talking to live pollsters but very seldom select candidates based on environmental issues.

I liken that to the Soul Asylum Barry Manilow experience I had. If you would have polled the thousand people streaming out of the Metro that night about their most memorable moment, very few of them would have cited the Barry Manilow song. But if you ignored what they said and listened to what they were humming, I think you would have seen that it wasn’t even close. Mandy in a landslide.

So to me, as someone who cares more about reaching a listener on a gut level than about my stature in some sort of matrix that ranks relative coolness, I would rather have written Mandy than virtually any other song. Certainly more than any of my songs!

So I guess that’s the lesson of being a pop music fan. Ultimately your goal is to communicate. Pop is short for popular and although I have failed up until this moment to create any music that is truly popular — the closest I ever got was when my Green song “My Sister Jane” reached the BeNeLux charts in 1989 — you know ultimately the measure of a song’s enduring value is how popular it becomes. That’s a sad fact to anyone who thinks that something like The Archies is empty calories compared to the depth and importance of some other song that’s “meaningful” but that very few people have heard.

Music is about communicating and if there are no listeners you have failed to communicate.