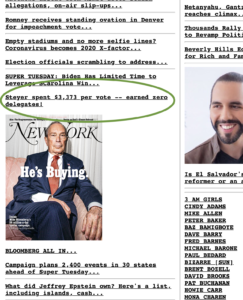 It’s hard to run for president. When it goes badly, it’s painful and embarrassing. I say that from experience. In this story for California Globe, I made the case that Tom Steyer, the self-funding investor who entered the crowded Democratic field after promising he wouldn’t, had mounted the worst campaign in presidential history. Looking back on it, that story would have benefited from a more precise headline. I didn’t really mean “worst,” which is a value judgment. I feel certain that there are awful people who ran campaigns that were far more morally repugnant than Mr. Steyer’s, whose campaign was essentially continuation of the name-ID building exercise that Steyer begun with his quixotic petition drive to impeach President Trump.

A more accurate headline probably would have read “Was Tom Steyer’s Campaign the Least Efficient in Presidential History?” That case is actually pretty darn solid. The billionaire first-time candidate spent $3,373 per vote and earned zero delegates according to my story’s math.

“According to the FEC, Steyer has spent $253,718,074 through January 31, 2020. All but $3,555,597 was from his own pocket. Pre-Bloomberg, a quarter billion dollars for the first four primaries is a staggering amount. But the incredible lack of return on that investment is even more eye-popping, especially for someone whose campaign’s sole justification was his supposed business acumen.”

Some commenters posited that Michael Bloomberg, who was still in the race at the time the story was published, had spent even less efficiently. I don’t think so. Bloomberg indeed outspent Steyer, and similarly failed to win the nomination. But Bloomberg at least enjoyed difficult-to-define “top tier candidate” status until things fell apart around Super Tuesday. And he eked out more than 10% of the vote in at least five states, spending less than $100 per vote in several states and nowhere near Steyer’s insane $3,373 overall.

The idea that campaign spending has polluted American politics has become an article of faith among the electorate, and certainly the media, as well. Maybe so, but there’s not a ton of evidence that proves high spending will lead to electoral victory. Bloomberg and Steyer were eye-popping counter examples in the 2020 Democratic primary, but recent history has provided dozens of proof points. Donald Trump was outspent by Hillary Clinton by about 2-1 in 2016 and was also outspent by several Republican primary challengers and their PACs. Joe Biden was outraised in 2020 not just by Steyer and Bloomberg, but by several Democratic challengers, including Elizabeth Warren and Bernie Sanders, at least until he secured the nomination.

While there is little doubt that it’s tough to win without sufficient money, there’s little evidence that overwhelming money results in electoral success.

I was thrilled when my story got picked up by The Drudge Report, both for the firehose of traffic that honor always bestows, but also because of my respect for Matt Drudge’s skill as an editor and spotter of worthy ideas.